Don't Forget About The Flu

People have been dealing with the COVID-19 pandemic since March 2020. So, while the flu has not only been out of mind, it’s also largely been out of sight, too. According to the Centers for Disease Control and Prevention, between late September 2020 and August 2021, clinicians confirmed a little more than 2,000 cases of flu in the U.S. Per the CDC, in a typical flu season, the U.S. sees more than 200,000 confirmed cases of influenza during that same time frame. Estimates of the 2019-2020 flu season show that 38 million people were ill with flu.

The most effective action a person can take to prevent the flu is to get the flu vaccine. Dr. William Schaffner, medical director of the National Foundation of Infectious Diseases said, “Two reasons make getting vaccinated against the flu the wise choice. First, it’s been proven year after year that you’re in better shape to fight the flu if you get the vaccine. Second, by getting vaccinated against the flu, you help protect the people around you.”

The CDC recommends a yearly flu vaccine for everyone 6 months of age and older, unless one’s health care provider recommends not getting the vaccine because of a prior severe or allergic reaction to the vaccine or a history of Guillain-Barré syndrome.

Flu viruses constantly change. Vaccines released every year keep up with the rapidly adapting viruses. Despite what some people think, the flu vaccine will not make a person sick with the flu. The vaccine triggers the immune system to produce antibodies to protect against the flu. It takes about two weeks for the body to develop antibodies, which is why it’s important to get a flu vaccine early. The CDC recommends getting the vaccine by the end of October. Since flu season commonly peaks during February, people can benefit from vaccination even if they wait until after October because vaccination can offer protection for the remainder of flu season. 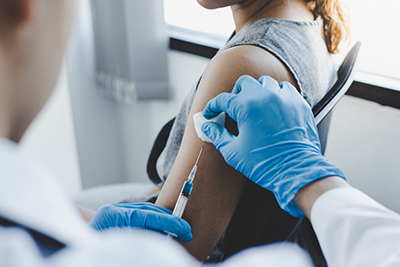 The recombinant vaccine contains a higher dose of antigen to help create a stronger immune response. It is approved for people ages 65 and older since some older people may develop less immunity after receiving the vaccine. Finally, the live attenuated influenza vaccine is administered as a nasal mist. This vaccine contains live virus and should not be given to those who are pregnant or immunocompromised. It is approved for ages 2 to 49.

There are many flu vaccine options, but it’s most important for people ages 6 months and older to get the vaccine. If you have questions about which influenza vaccine is best for you, talk to your doctor or other health care provider.

Staying Safe in the Office During COVID-19

Can You Have Flu and COVID-19 at the Same Time?

Save Yourself Time - Check In Online