Temperatures are rising, and people are enjoying more outdoor adventures. Snakes are starting their warm weather activities as well, increasing the risk for human confrontations. This information may help you prevent venomous snake bites and understand first-aid measures if a close encounter results in an injury.

The most common venomous snakes in the Southeast are rattlesnakes, copperheads, cottonmouth/water moccasins and coral snakes. Venomous snakes bite about 7,000 to 8,000 people in the U.S. each year and about five of those envenomated die. The death rate would be much higher, but most individuals seek immediate medical attention for anti-venom treatment, which drastically improves survival and morbidity. Disability and permanent injury such as amputations or loss of limb function are more common consequences.

Rattlesnakes, such as the diamondback and the cane break in South Carolina, can accurately strike one-third or more of their body length from a coiled or stretched-out position. Rattling is an ominous sound and serves as a warning when the snake feels threatened, but they may not always rattle before striking. Rattlesnakes are commonly found near old sheds, rock or brush piles, logs or open areas, warming themselves or hunting for small rodents. They can also be found cooling themselves in shady areas on hot days. 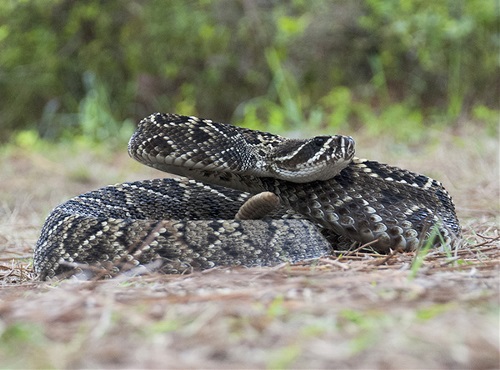 Adult copperheads are usually smaller than rattlesnakes and typically have a light and dark copper-colored banding in the shape of an hourglass. They are extremely camouflaged in pine straw. They strike when threatened or stepped on but are normally not aggressive. Copperheads find cool and moist areas, such as shade forests, swamps or river edges, more suitable. 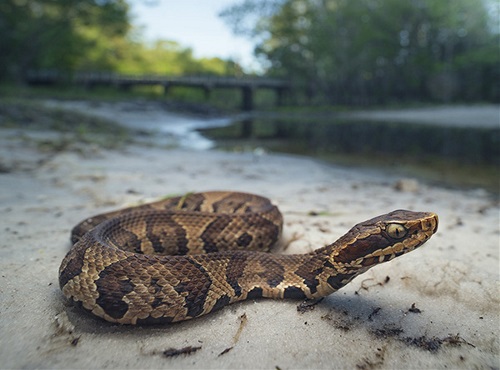 Cottonmouth snakes can be as large as 4 to 5 feet long and are thick in girth. Characteristically, they display their open, white mouth when threatened. They live mainly in swampy areas and thrive around freshwater river or creek edges. Cottonmouth snakes tend to be aggressive and swim towards activity in the water. 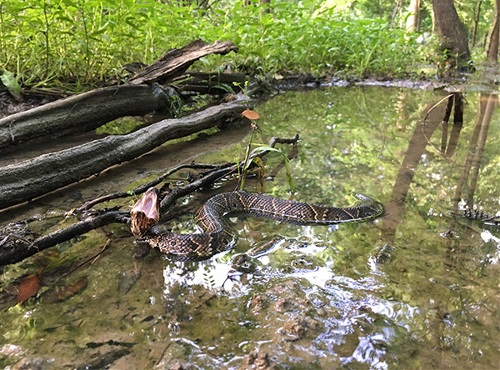 The coral snake is a smaller, thinner snake with black, red and yellow bands and can be confused with a non-venomous scarlet king snake with similar markings. The adage is “red on black, put it back; red on yellow, kill a fellow.” Coral snakes are not aggressive and tend to hide in leaf piles or burrow into the ground in woody or sandy areas. 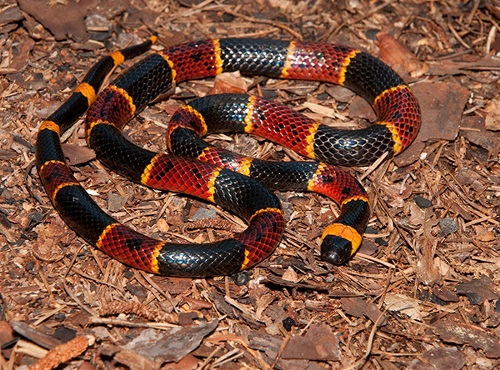 Rattlesnakes, copperheads and cottonmouths are all pit vipers and produce venom that is cytotoxic, causing significant tissue damage and affecting clotting activity. Signs and symptoms of envenomation can include local puncture marks; redness, bruising, blisters and swelling; severe pain at the site; nausea and vomiting; difficulty breathing; rapid heart rate and weak pulse; change in vision; metallic, mint or rubber taste; and numbness or tingling around the mouth, tongue or scalp.

In comparison, a coral snake’s venom is a neurotoxin that causes muscle weakness, slurred speech and double vision. Symptoms are slow to onset, and the bite may not be painful. Paralysis and respiratory failure result from significant envenomation. There have been no reported deaths from a coral snake bite since the late 1960’s.

First aid for a snake bite starts with getting medical attention fast. Call 9-1-1. Get an ambulance to transport the victim. If there is envenomation, the faster anti-venom can be started, the better outcome. Identification of the snake can be helpful in treatment. If possible and safe, take a picture of the snake. Stay as calm as possible. Have the victim sit or lie down with the affected extremity in a resting, neutral position. Remove any constricting articles (e.g., rings, watches) from the affected extremity. Wash the area with soap and water, if able, and cover with a clean, dry dressing. Mark the time and the leading edge of any pain, swelling or redness on the skin. 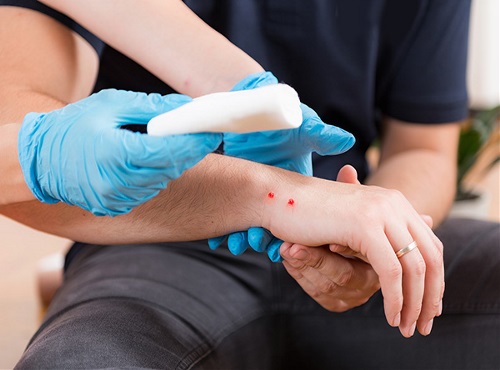 Wash the area (of the snake bite) with soap and water, if able, and cover with a clean, dry dressing.

Do not pick up or trap the snake. Do not wait for symptoms to appear. Do not apply a tourniquet, cut the wound or attempt to suck out any venom. Do not apply ice or elevate the wound. Do not drink alcohol for pain or take any aspirin, ibuprofen or naproxen.

Ask the Doctor: How Can I Help My Child Cope with Quarantine Fatigue?