Eli Ailshie was excited for his senior year on the Blythewood High School varsity football team as a wide receiver and safety. But one Friday afternoon at practice, the 17 year old hurt his left pinkie finger while going through blocking drills.

Despite some help from athletic trainers on the sidelines, the injury left Eli in considerable pain. His mother took him to the urgent care center at Lexington Medical Center Northeast, the hospital’s new community medical center on Longtown Road in Northeast Columbia.

An X-ray showed Eli’s finger broke near the joint.

For Eli, who has had his share of injuries throughout his football career, the news devastated him. He saw his dream of a final full season of high school football falling apart.

“My freshman year, I broke my hand and only played half the season. Sophomore year, I played the full season and it was the most fun I’ve ever had playing football,” Eli said. “Last year, I moved up from JV to varsity and, a week before the first game, I tore two ligaments in my elbow doing hitting drills. I missed the entire season and it killed me inside.”

But Lexington Medical Center clinicians had other plans.

Eli went to Southeastern Orthopaedic and Sports Medicine’s office in Northeast Columbia. Doctors planned a surgery to insert three tiny pins that would allow his finger to heal quickly and correctly, a customized removable splint and cast, and a schedule of physical and occupational therapy. It would have him back on the field within a week, ready for his team’s first game.

“It’s my senior year. I just didn’t want to sit out another game. I was adamant about it. And the doctors were with me 100 percent,” Eli said.

Sure enough, Eli was back at football practice the following Monday, less than a week after the surgery. Then, therapy began.

“The first order of business was to make Eli a custom, hand-based splint to protect his finger while it healed,” said Latisha Washington, OTD, OTR/L, occupational therapist at Lexington Medical Center Northeast’s rehabilitation department. “Then, we started working on regaining his left hand strength, range of motion, coordination and edema management.” 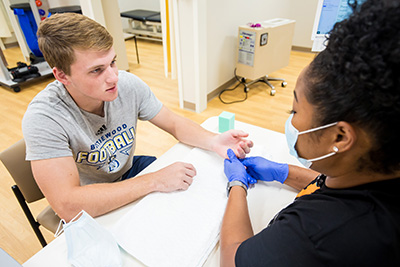 The occupational therapist said it was important to get Eli’s hand back to normal so he could participate in football the way he did before the injury.

“Eli’s a tough kid with a great spirit, so I have no doubt he’s going to recover well,” Washington said.

That prognosis is reassuring to Eli’s mom, Stacie Weaver. Watching her son struggle through another injury was difficult.

“I was definitely sad and heartbroken for him. He puts his entire heart into it. He doesn’t miss practice. He does the best he can.”

She’s thankful for the care he received.

“He wants to play, and we want to watch him play,” she said.

And after all the injuries over the past four years, the new Northeast Columbia location makes things much easier.

“It’s about five minutes from Blythewood High School. And having a rehabilitation department there is definitely very convenient,” Stacie said. “Having that campus is a benefit for all of Northeast Columbia.”

“I’m able to use it without any limitations and feel like it’s getting better every day, especially with occupational therapy.”

Lumps and Bumps on the Hand