Patti Williams woke up in the middle of the night and thought she was having a heart attack.

“I had pain in my chest, back, jaw, neck and down my left arm,” she said. “It was the worst pain I’ve ever felt in my life. And I was terrified.”

Patti had a hiatal hernia, which occurs when the upper part of the stomach bulges through the diaphragm. A hiatal hernia may cause acid reflux or gastroesophageal reflux (GERD), where stomach acid backs up into the esophagus. In some cases, that can cause the type of pain Patti felt.

Patti told Dr. Givens she’d been experiencing acid reflux symptoms for about two years. She noticed that when she ate certain things – including onions and fried foods – she would experience indigestion, heartburn and even a nagging cough. Sometimes, it would get so bad that she broke out in a sweat and felt nauseated. She treated it with medications, but it always came back.

“Medications can suppress acid reflux symptoms, but they don’t take away the core of the problem. Acid reflux continues to damage your esophagus,” Dr. Givens said. “The only way Patti was going to get relief was with surgery.” 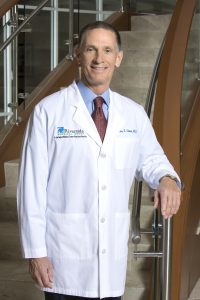 Dr. Givens told Patti about a new surgical option called LINX®. During this laparoscopic procedure, doctors implant a small, flexible band of magnetic beads around the esophageal valve. The string of beads opens and closes to allow patients to swallow food and liquids, but it doesn’t allow contents back up into the esophagus. The magnetic attraction between the titanium-coated beads keeps the valve closed to prevent reflux.

“LINX is the most important change in anti-reflux surgery in the last 70 years,” Dr. Givens said.

The procedure takes about an hour. Patients can go home within a day and are typically back to work and their regular routine in a week. According to Dr. Givens, someone who needs to take acid reflux medications every day to ease their symptoms should consider a surgical option such as LINX.

Patti underwent the procedure in February. During the operation, Dr. Givens also repaired her hiatal hernia.

After the surgery, Patti noticed clear differences and felt better. “I don’t have to take medication anymore for acid reflux,” she said. “Before the surgery, if I didn’t take medicine, I’d have bad indigestion and chest pain. That doesn’t happen anymore.”

What You Need to Know About Diabetes