Have you ever felt a burning pain in your chest after eating? Does it get worse when you lie down? Those are some of the main symptoms of gastroesophageal reflux disease, also known as GERD, or acid reflux disease.

More than three million cases of GERD are diagnosed in the United States each year. Medications may help ease symptoms, but they doesn’t fix the cause of the problem. That’s where the physicians at Riverside Surgical Group, a Lexington Medical Center physician practice, can help. They’re performing the latest surgeries to fix the underlying problems that cause GERD and bring patients permanent relief. The procedures are minimally invasive and highly effective.

“GERD is a condition in which the contents of the stomach wash back up into the esophagus and cause irritation,” said Dr. Antonetti. “It can cause heartburn and indigestion, but also chronic respiratory problems, bad breath and teeth problems.”

Typically, the cause is a problem with the valve located between the esophagus and the stomach. At first, many patients start taking antacids or acid inhibitor medications to alleviate symptoms. But the medicines don’t work to stop the reflux from happening.

That’s where surgery can be the best option.

One of the latest procedures is called LINX®, where doctors implant a small, flexible band of magnetic beads around the weak esophageal valve. The string of beads opens and closes to allow patients to swallow food and liquids, but it doesn’t allow contents back up into the esophagus. The magnetic attraction between the titanium-coated beads keeps the valve closed to prevent reflux. LINX is implanted during an incisionless surgery that takes about an hour. Patients can go home within a day. 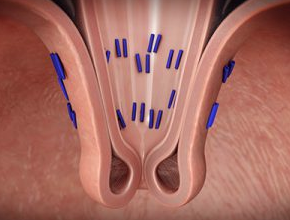 A second option is TIF. In this incisionless procedure, doctors insert a device with a small camera through the patient’s mouth and into the stomach. Then, they stitch the bottom of the esophagus and top of the stomach together to build a new valve that will restore the body’s natural protection against acid reflux.

While doctors have been performing surgeries to help acid reflux disease since the 1950’s, those operations used to require everything from several small incisions to a large 12-inch incision in the abdomen. Today, the procedures are incisionless and require minimal time in the hospital.

Riverside Surgical Group works with patients to decide which procedure is best for them.

Now Accepting COVID-19 Vaccine Registrations for Those in Phase 1B

Ask the Doctor: I'm Concerned About the COVID-19 Vaccine

Take Charge of Your Diabetes